We have an answer from NASA 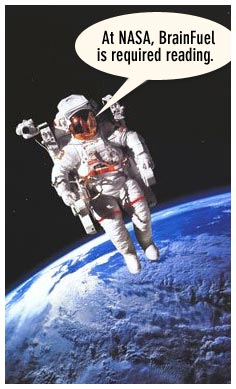 Well folks, do you remember the whole discussion about whether an airplane sitting on a conveyer belt runway would take off? It just so happens that someone from NASA posted a comment today at BrainFuel.

The comment from a NASA engineer reflects the viewpoint I had about this topic. Here is his answer:

This problem can be understood quite simply by considering the example of a plane with frictionless bearings in the wheels. Examine the case when no thrust is applied and the conveyer moves at any speed. The plane will remain motionless with respect to the ground while the wheels spin at the conveyer speed. Now apply some thrust and the plane will start to move forward relative to the ground because in this case the speed of the conveyer (with frictionless bearings) can have no effect on the plane motion. As you increase thrust the plane will take off just like a normal plane. In fact from an observer on the ground the take-off will look perfectly normal. Now add some friction to the bearings and the only thing you will have to do is add a little more thrust to overcome this friction. Again from an observer on the ground the take-off looks exactly the same with the exception that the wheels seem to be spinning too fast. This is different from a car because the car must have locked (not frictionless) bearings (at least in one axel) in order to move.

7 responses to “We have an answer from NASA”