BrainFuel is a design blog written by a web design team from Phoenix, AZ and around the country. BrainFuel has been publishing about design and technology topics since we launched this blog on January 25, 2001.

Chris Tingom
Chris is the founder and designer at Tornado Design. He is interested in user interface design, coffee, WordPress, and the web. Most of the posts on BrainFuel are by him, and Chris is currently the only author on the site at this time. You can follow Chris on Dribbble, or Twitter.

April 15, 2002: We registered brainfuel.tv domain name and moved to WordPress, away from Moveable Type. 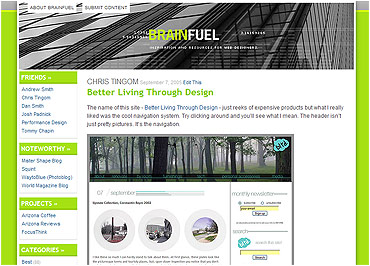 October 21, 2009: We relaunched a new design and interviews with designers.

Tom Chapin
Tom is interested in both design and programming, with a focus in PHP and Ruby on Rails.

Kent Downer
Kent is a web designer / developer and former barista. He lives with his wife and two children in Phoenix, AZ.

Don Fitzsimmons
Don is a web developer in Phoenix, AZ with an interest in politics, law, photography, and more.

Andrew Smith
Andrew Smith is both an enigma and a mystery. Actually, scratch that. He really isn’t. He’s a Hyper-dimensional mushroom with superpowers.

Ben Wood
Ben is an interactive web designer and developer. Ben has been developing web sites since 1996. He grew up in Kalispell, Montana. Ben originally named this blog and created the first version of it with Movable Type and then Blogger.com.

Jeff Schinella
Jeff is an an interactive designer living in the Phoenix area, originally from New York.