Another typographic video that was featured at Phoenix Design Week.

I saw this video last week as part of the Phoenix Design Week conference and thought it was absolutely splendid.

Here’s a sweet idea! Make an annual report for yourself! Too bad it would probably take 20 hours just to produce a report this spiffy. Nicholas Feltron was recently shown holding his annual report in the Wall Street Journal.

I’d wager that Mr. Feltron is the sort of person that wouldn’t spell his own name wrong, but for some reason the Wall Street Journal did. At least he got it right in his report, which is beautiful. I’d also guess that Feltron is the sort of guy that tracks his time — wise. Anyways, I thought it was cool and wanted to share.

A couple of the guys here at Tornado have been playing with FontStruct and making some fonts. It’s a pretty neat tool, and free! 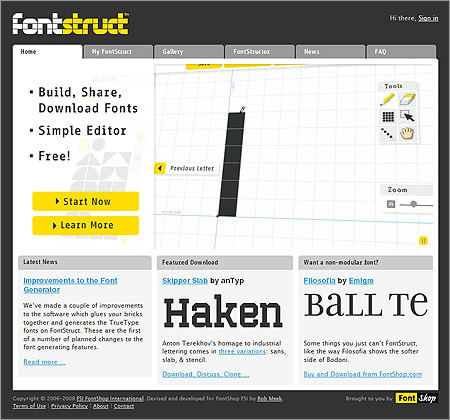