Drawing a smiley face on the moon 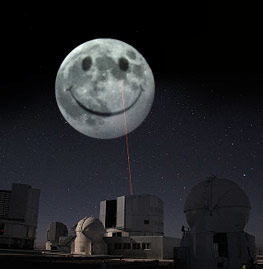 What would you do if you had a billion dollars? I don’t know about you… but I would definitely develop a method to draw a smiley face on the moon. Call me crazy, but can you think of a better legacy to leave behind? Yeah. I didn’t think so.

Think about it. Future generations of mankind would look up in the sky at night, only to see a big smiling face. Wars would cease to exist! How could people even think about fighting with a giant smile in the sky?

Or maybe we could sell the moon one pixel at a time? Like the milliondollarhomepage.com site did?

Maybe we could use a high powered laser that would burn the dust and turn it black or something… *scratched his head*. What do you think?

Seriously though, what would you do if you walked outside one night and noticed a smiley face on the moon?

15 responses to “Drawing a smiley face on the moon”