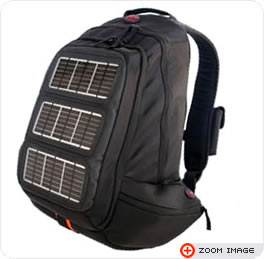 Lately I’ve been carrying two laptops with me everywhere I go. My Toshiba and a Powerbook. Man, my backpack sure gets heavy. The thing I love about laptops is I can go anywhere and work and be productive (the only thing I don’t have is my second monitor). I’m a big fan of coffee shops with wireless internet and I frequent them. It’s a nice way to get out of the office, be in the sunshine for a bit during the day, and have some fun.

I ought to put in a little plug for Toshiba right now. We own two Toshiba’s here at Tornado (both the same style). Mine’s the Toshiba P10 and it is awesome. So if you’re on the hunt for a PC laptop I suggest Toshiba.

Anyways, laptops always lose their power pretty fast. With this bag, called The Voltaic Backpack, a person could literally go all day long as long as you were positioned outdoors somehow. In the wintertime in Phoenix that could be ok, being so pleasant outside. Slick. If anyone has experience with a bag like this please let me know!!

2 responses to “The coolest backpack”