I was reading about this new social bookmarking product called Ma.gnolia. What startled me about this product was the mass of talent involved with launching it.

The company behind Ma.gnolia did all of the development only outsourcing the design part of the gig. That makes sense. What doesn’t make sense is why so many people were involved in design. I count six! 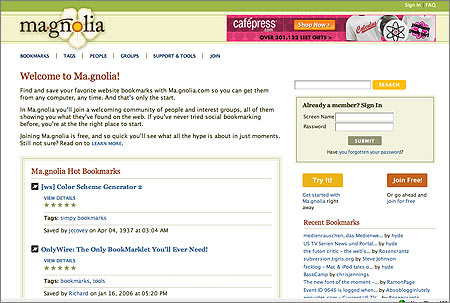 Almost all of those people are high-profile and I am sure would have been completely capable of handling this project alone. At the very least, two people with adequate time could have done this.

Then it hit me. I think these people were involved because of their visibility. They could hire them to design the product and at the same time it would bump marketing and visibility. It’s a genius idea except for the high cost involved. Most under-funded startups couldn’t pull this off. If each person needed to make $7,500. that’s an immediate $45,000. for just design.

I think these people were hired because of the awareness they would subsequently create about the product through their own channels.

At the Tornado office we were discussing this very thing — once you build a great web app how does the world hear about it? I think that the Ma.gnolia people have come up with an interesting solution to this problem. Whether it was intentional or not it has obviously worked for them. I have to ask however if it would have been as effective to simply give a “pre release” login to a good dozen high profile designers and coders. Certainly if the product is good it would have been talked about.

Despite all of this the future of Ma.gnolia remains a question (as with any new web application). Ma.gnolia needs to unseat de.licio.us and that is altogether a different story.

5 responses to “Ma.gnolia: A new approach to creating buzz?”