The chalice from the palace has the brew that is true! 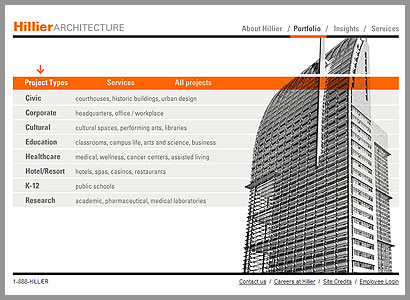 I came across this all Flash Hillier Architecture web site today and wanted to share it with everyone. It’s superb in its simplicity and use of a limited color pallet. I liked the way it navigates and feels like a normal web site even though everything is in Flash.

Christmas is quickly approaching and the folks at 37signals created a handy guide for e-commerce during the holidays. The guide is made up of screenshots from major e-commerce sites showing what others have done during past Christmas seasons.

There is a new Mozilla web site which is quite nice. It launched last week.

There’s an awesome free Flash photo-gallery system called SimpleViewer. Alongside of the basic Flash file there are several aftemarket plugins (also free) that automate management of the photos. VERY slick.

A very nice design for WordPress blog. I like the typefaces especially.

And this has to be Danny Kaye’s greatest line: The pellet with the poison’s in the vessel with the pestle; the chalice from the palace has the brew that is true! – from The Court Jester.

One response to “The chalice from the palace has the brew that is true!”