In honor of the journey Chris is taking south of the equator this month, I thought it appropriate to pay tribute to some unique things that make Brazil special…

Just cool. The colors, the style and the unique star-studded Southern Hemisphere sky. The sky depicts 27 white, five-pointed stars one for each state and the Federal District. the stars are arranged in the pattern of the night sky over Rio de Janeiro on November 15, 1889 (when the last Emperor of Brazil was deposed, and the republic proclaimed). The stars in view include the constellations Southern Cross, Scorpius, Canis Major and others. A banner across the sky reads, “ORDEM E PROGRESSO,” which means “order and progress” in Portuguese. 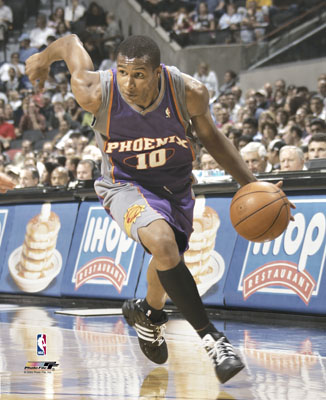 The “Brazilian Blur”, possibly the fastest basketball player (with apologies to Lebron James and Gilbert Arenas) on the planet. He’s serving as an offensive catalyst for the current NBA Phoenix Suns playoff run. In one memorable play against the Los Angeles Lakers, Barbosa drove 1 vs. 4 defenders beating each of them to the basket with pure speed prompting coach Mike D’Antoni to state “For about 10 minutes tonight, he was the fastest man on Earth.”

Brazil expects to become self-sufficient in energy this year, meeting its growing demand for fuel by raising output both from petroleum and ethanol. The use of ethanol, from sugar cane, is so widespread that gas stations have two sets of pumps, marked A for alcohol and G for gasoline. (More on NPR)

These hot, freshly-fried churros are served street-side with a fresh, hot carmel filling. (Confession: I discovered these on a cold February morning at Petticoat Lane Market in London. My friend Nathan, who spent a couple years in Brazil confirms these churro are readily available on the street and delicious.)

Champions in 2 of the past 3 World Cups, probably the most successful football team in the world. It is often said that in football (soccer) “The English invented it, the Brazilians perfected it.” No wonder Nike pays the CBF $12 Million/year to wear the swoosh.

Update: Mark points us to Ronaldinho!

A style of restaurant service in Brazilian restaurants. Pay a fixed price and the waiters bring food to each customer until the customers signify that they have had enough. Servers come to the table with knives and a skewer, on which are speared various kinds of meat, most commonly local cuts of beef, pork, or chicken. Awesome!

All this and I have never been to the country! Yet. Who can add to the list?