Apples and Oranges (and Intel)

I gathered comments from the people who make BrainFuel great. No, not you the reader. The posters. Yes, I know that the posters are also the readers but that’s besides the point. Well, I guess that’s not entirely true, but it was funny.

The question was what their take was on the Apple and Intel switch. Apple switching is quite the news. So without straying too far off topic. I present comments and quality content you can only find on BrainFuel. Here’s some background if you are asking yourself what this is all about. 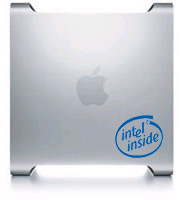 A BrainFuel representation of the new Mac with an Intel based processor.

Andrew writes: Within the course of human events, there comes a time when Apple must switch to Intel processors.

Wasn’t that, like, predicted in Revelation or something? —Andrew

Ben writes: It’s too early to pass judgement for the decision… Knowing something of the emulation technology Apple will be using, it may not lose any speed on older applications. Newer ones should run much faster also. The first intel processors will be a gigahertz faster than the current fastest G5, and Apple will probably offer these in dual core or dual dual-core systems, making them very very fast. As long as I don’t have to purchase new licenses for the software I currently use just to use the new machines, I’m happy.

The big negative for Apple will be purchasers of high-end machines holding off buying until the new Intel-based machines are available. — Ben

Tommy writes: Supposedly, Apple has been preparing this for 5 years. I read that ever since they began OS X, they have secretly been compiling x86 versions as well. In fact, they have the ability to run OS X on a Pentium 4 and have even demonstrated it.

Why is this possible? Quite simple: OS X is based on Linux.

So here’s the idea. Instead of pouring money into continual development of their existing RISC Motorola hardware so that it will run faster, why not just run OS X on cheaper and faster x86 technology?

Of course, all of the Macintosh purists are furious now. They’ll rave on and on about how Apple and Steve Jobs is a traitor, blah blah. But in reality, what should it matter what architecture the stuff is running on as long as it runs OS X fast and reliably? Life goes on!

In reality, Mac purists are just mad because their pride is hurt. They can’t stand the thought of Apple switching to x86 because for years they have been dissing on PCs. Now the very idea that they may be joining the enemy (in a small, albeit undeniable way), just eats them up.

Chris writes: The only thing I’m really wondering about is when the G5 Powerbooks will be announced. Considering that the current line of Powerbooks are no match for their G5 tower counterparts, I wonder if G5 towers will begin to outsell the Powerbooks.

I’ve heard people talking about the possibility of running Windows on Mac hardware and the idea of running Windows and the Mac OS on the same Powerbook hardware is appealing. I could have the best of both worlds and portability. I wonder how this affects Virtual PC.

One thing for sure, Intel wins big time on this one. On a side note, check out this awesome graph on the Intel site which shows Moore’s Law. —Chris

Jeff writes: Overall, I think it will be a great benifit to Apple, and to us. After reading a few articles on the topic, I believe ultimatly (yes, there will be bumps along the way) we will get a more powerful mac, it will be more compatible with Windows PC’s, and they will (should be) relatively more inexpensive than they are now.

(At Press Time Don’s comments had not been received.)

7 responses to “Apples and Oranges (and Intel)”