Working for the city is a safe job 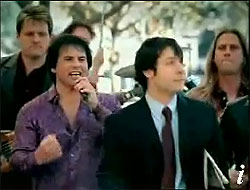 On Saturday morning I packed up my camera and went to a little open house a friend of mine was throwing. It was a great time and of course I got to take pictures with my flash. There were a bunch of new people there that I had never met, and one guy in particular caught my attention.

After asking the two key questions people ask (where do you live and how do you know so and so) someone asked what he did for a living. He said he worked for the city. Then he commented that it was the safest job in the world and said that he would probably have to murder someone in order to get fired.

Maybe it’s time that our cities adopt the GE management idea and regularily trim the bottom 10% from their workforce.

One of the first things I thought about was the idea that “safe” means different things to different people. To this guy, safe means a steady paycheck and benefits. And I suppose he won’t have to dust off his resume too often.

To me, a safe job means that I’m in control of how much money I can make. That doesn’t always mean I get to pick when I work, but ultimately I am in charge.

So this got me thinking. Is there a way to combine both of these worlds. I think that profit sharing plans are a start, however I like some of the things that Semco does in Brasil. They basically put people in charge of their salary along with the ability to hire and fire their managers. Since their co workers can also vote to remove someone, there’s a lot of incentive to be fair.

I know that not everybody is in a position to introduce plans and systems like this, but I think it’s wise to consider and aim towards that goal. The trick always comes down to whether the people on your team have an owners mentality.

What’s the point of this post? Well, I just read a fun article called 10 Reasons You Should Never Get a Job. I have been approaching my business with this model recently. Building up an all-service business is hard because you have to spend time in order to earn money. That’s why I’m slowly moving into ideas that earn residual income. It’s not easy but everything has much greater potential.

And that’s really what it’s all about.

4 responses to “Working for the city is a safe job”