Sometime after lunch yesterday we got a knock on the door here at the office. I have never understood why people knock on office doors. Usually offices are considered “just walk in territory,” at least in my book. Once you walk in there’s always a friendly person sitting there who’s sole job is to say hello.

This is not the case at Tornado. We’re friendly, but we don’t have a person just sitting there. But I digress.

So this APS guy is standing there and he says “I need to reset your power meter and your power is going to go off for about a minute, ok?” I wasn’t about to start a fight so I say “ok, give me 1 minute” and I promptly unplug random electronics. (APS is the power company)

So we had no power for hours.

Then we find out that he didn’t even warn our landlord he was coming and even better: He wasn’t even called out!

This morning we have power again so I think the landlord hired an electrician to get it fixed. Who knows when the next APS guy will show up though. Such is life.

As soon as everyone’s laptop batteries had died things started to get interesting. First I put on my Groucho Marx glasses and nose and went around to the different offices saying hello. 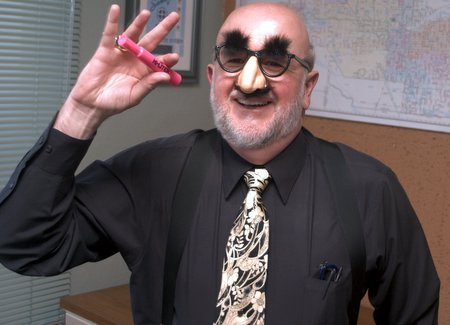 Here’s a photo of Bob doing his Groucho Marx impersonation.

This guy named Bob who has an office in the same complex saw this and came over and took it a little further (as you can see in the photo). So then after the real estate tycoons on the end got a kick out of this, Bob went over and spoke with the APS people with these glasses on (another APS guy had just driven up). They must have thought we’d lost it.

One response to “The APS Guy”