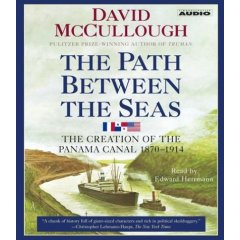 I’ve been listening to audio books in my car a lot lately. I’ve been able to enjoy several lately (much better than talk radio since you learn something). I just finished David McCullough’s book called The Path Between the Seas: The Creation of the Panama Canal, 1870-1914.

Now the first thing to notice is the 44 year timespan it took to create the canal (really a long canal with locks and a lake in the middle). That timespan includes a lot of failures that built up to success in the end. Failure by both the French (yes, the French were involved which I didn’t know) and the Americans.

Some other interesting tidbits:

Overall it was a fantastic book. I previously had only a cursory knowledge of the Panama Canal yet never knew the history or the great struggle to build it. Fascinating book and I would recommend it. I’ve also had the privilege of listening to some other books by this author and hope to write up a review soon. He’s a very good author and gives you details that add to the story.

Here’s a link to Amazon with more info. You might also find the article on the Wikipedia to be of interest.

This book gets four Gophers (it’s the Chris Tingom rating system for October). Here they are:

Why four gophers intead of five? Well, in my opinion the book spent too much time focusing on what happened with the French (first half of the book) rather than the Americans (the last half of the book). The American part could have been longer and added more details. But that’s just my opinion. Overall it was an excellent read!!