Okay, so the other night I visited a Seattle’s Best that was inside a Borders Bookstore here in Phoenix. I ordered a small mocha and thought about their recent rebranding.

Over at Brand New, 46% in a poll agree that the new logo is a “dumb move.” Which is interesting to me, considering how much I liked it when I saw it in-person the other night. I suppose it’s the old-world charm of their old logo that people miss the most. The new branding however probably frees up their design team to explore a lot of new directions they could not have gone before.

I must say though, that their new web site is rather cool looking. The colors they chose are new and modern, and have a pastel quality. I like the interactive components, and their “coffee level” concept. That’s new, and I haven’t seen that before.

The funny thing is they’re owned by Starbucks, which also recently redid their logo. 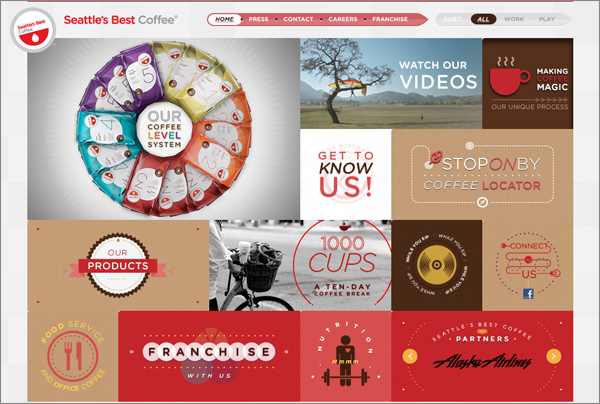 I’d say the one thing I don’t really care for, is the rounded font they chose for their logo. And why did they rotate their logo on their web site? It’s a good logo that didn’t need to be rotated.

Other problems I see, are the curious lack of a clean URL structure for sub pages (no URLs at all, actually on most), and a frankly mysterious structure to the sub pages, apparently all designed but with little text.

According to Seattle’s Best, this is their first rebranding in 40 years.