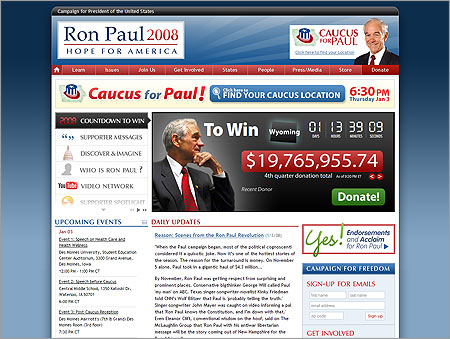 Principal of Tornado Design, a Phoenix, AZ based web consultancy

Ron paul hit 10% in iowa a good percentage over Rudy and a fraction below McCain. Ron Paul Revolution (I think over the next 4 years i am going to keep on saying this)

I watched the Fox Republican debate tonight because Ron Paul was going to be allowed, mind you, I said allowed, to participate. Fox relented, only, after many of us wrote them with our dissatisfaction with their un-American prejudice. I am not endorsing Ron Paul and have not made my decision who is best qualified as yet! That said, I would not have tuned in Fox had they left Paul out of the debate. I tuned Fox out several years ago and will continue to do so.

After the debate Fox operatives had a room with S. Carolina’s ready to share their opinion of the night. Who won! Who Lost! Well the folks in the room that I believe may have been rehearsed, or they saw a different debate, said Thompson won, Paul lost! Not from where I was sitting! Thompson did not even garner some active applause though he had some moments! Ron Paul certainly did get several good hardy hands after his assessment of the mess our nation is in. Only three men stood out at the Fox debate & the applause from the audience bares this out!

It was very obvious that Paul was the target of Fox as he was snubbed more then addressed to speak! What are the media power brokers afraid of? The truth? Paul “Dares’ speak truth to power with the heart of a patriot, giving no quarter, and, with no apologies!

The recent Iranian incident was brought up by a Fox moderator with no mention of the fact that the captain of the Navy vessel has said that they are not sure the threat did not come from some other radio, other then the Iranians out in thier own waters. Paul “Dared” to mention this important fact. The other candidates did not! These are the men who wish to lead our nation and only Ron Paul seems to be doing his homework! Hummmmmm!

Anyway, since the pundits are spinning, tossing the bait of you know what out, in big smelly piles, as usual, I had to put my two cents in! Paul is a purest, no doubt about it. After the latest gossip about his being racist subsides, as I pray it will. I say I pray it will not because I believe it, but, because the media can be like a mad dog when they get something that they can use against those they wish to destroy!

Those who know Paul, forever, say, he’s a very unique man! Loyal! Honest! Dedicated! A good family man! A Christian who loyally practices his faith but does not flaunt it! One knows from watching Paul that he does not use faith but his political views to woo his followers. I wish those who know him well would come out and share the stories that I have been hearing!

Like I’ve said I have not decided who I will vote for or support but, this being America, I feel that the underdog deserves to be treated with respect. After all, Paul received more New Hampshire votes then Thompson! His record, as a Congressman, bares out that he’s a Constitutional purest! Our Founding Fathers would certainly approve!

While I am not, though I am sharing some research on Paul, trying to influence the way one votes this Presidential election I wholeheartedly, believe, America, should be honest, open to debate, willing to listen to those we like, or don’t like! Extremely important if we are to be an informed electorate truly seeking forthright leaders. America’s future depends on Patriots who “Dare” oppose those who are pretenders, liars and cheats, because they, the deceitful pretenders, are violating America….!

Assume Nothing! Question Everything!

When Dreams Die, So Goes Greatness!