EML looks similar to a design I did for a client a number of years ago (which was, unfortunately, never used). Check out EMLlabs. 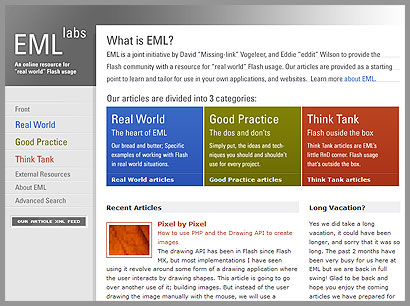 In other BrainFuel news, this post is our one thousandth! Yes, quite an achievement. Never before in the history of mankind has such a mass of useless information, cluttered writing style, and often witty commentary graced this fruited plain.

Special thanks to our string of successful, and highly capable posters including (in no particular order):

Ben Wood – famous, always likable, often geeky, and always clever. He needs to go out and buy that Nikon digital camera he’s been talking about for 2 years now. Ben’s on the cutting edge when it comes to home entertainment.

Andrew Smith – let’s just say he endorses products and usually doesn’t get paid for it. Andrew is our most recent addition to BrainFuel and a good fit. He also designed the current site. He’s a WordPress whiz.

Tommy Chapin – This guy’s good. He can do a lot of cool stuff and floating in the air is one of them.

Jeff Schinella – What to say about Jeff? He’s cool. He lives in New York. He’s honest. Oh, he likes food. Don’t we all.

I post as well but I won’t write anything witty about myself except to say whatever you’ve heard isn’t true. I’m going to try this sometime though.

So, let’s see. That leaves us at post 1000. It took us about 5 years to reach that number. BrainFuel began in 2000. Wow, that’s a long time. BrainFuel first started out as a site called “cool sites” and I give credit to Ben for coming up with the current name. Good name, Ben. It stuck somehow and it’s distinctive. When this site first began it was meant to be more of a personal resource actually… because the web was still somewhat new at that time and I’d come across nice sites and would want to keep a list of them. This site was never actually public until almost 6 months after it started. Then people started finding it and submitting sites and it went from there. BrainFuel is currently on design version 5 (I think).

So that’s the brief history of BrainFuel, for what it’s worth. It’s always fun to hear from people who read this site. One time, about a year ago, I got a letter in the mail with a funny stamp on it. Inside was a letter with a tea bag. The letter said “thanks for mentioning us on BrainFuel, enjoy a cup of tea on us!” and so I did. The letter was from some design firm in Singapore.