Narnia: The Lion, the Witch and the Wardrobe 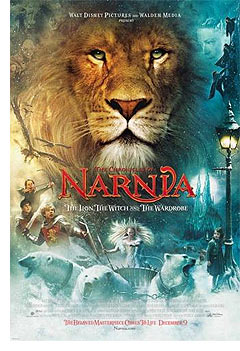 I saw Narnia on opening night and really enjoyed it. I had kept my expectations low because I certainly didn’t think it would be possible to have a beaver that talks and doesn’t look cheesy. Not to mention some dozens of other talking animals. Yet, somehow they pulled it off — the beavers were very realistic.

Whoever wrote the screenplay deserves an award. The dialog was very, very good. I have seen so many movies where the dialog felt unnatural. I think films with young actors fall into the trap of poor dialog combined with poor acting far too often. This movie does not. In fact, I was impressed with the actors who played the 4 Pevensie children. They really knew their characters and the dialog fit perfectly.

This film could have been an hour longer. It was very fast paced. I found things moving almost too quickly. Winter moves to summer fast: One minute they’re on frozen ice and the next they’re on a plain with green grass and sunshine. Perhaps in the book that happens as well, its been years since I read it.

I thought the wolves were very realistic and I thought it was impressive how the White Witch creates disappointing moments for her captors. That was very dynamic.

If you’ve seen the 1988 television version you’ll see a lot of similarities. For the television movie they eventually made The Silver Chair and Prince Caspian and the Voyage of the Dawn Treader (IMdb). Both were quite good for their time and I hope they remake those as well.

Overall I give it 4 Beaver Units out of five using our highly scientific Beaver Extra Awesome Veritable Expert Rating (BEAVER) system. Here they are in no particular order:

13 responses to “Narnia: The Lion, the Witch and the Wardrobe”