My new plant from the Amazon needs a name 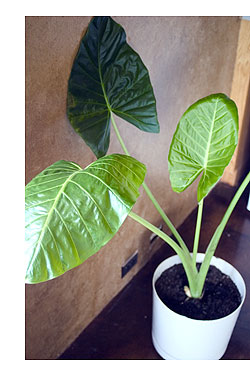 My good friends gave me a plant for the office (hooray) and I’m at a loss for names. Any recommendations? And no, I am not going to name it Jeff Bezos. That wouldn’t be right. It’s from the Amazon, not Amazon.com.

So this weekend I went to a bachelor party for a friend who is getting married next week. It was more of a BBQ than anything, and it was way out on the west side in Laveen, AZ. If you’ve ever been to Phoenix, or even if you live here, you’d probably ask where on the planet Laveen resides. So I’ll tell you. It’s approximately 51st Ave and Baseline. Yeah, I had to ask the first time, too.

I’m no card shark by any means and coming in third in the poker championship was a surprise. I have played once before and that was last winter. I began by asking about the rules for a refresher and by the end of the game they all thought I was a poker expert! I kept lining up rivers as they say and doing it in a very smooth and precise manner. It was great! For the record, there were twelve people in the game (two tables initially).

Ok, a quick joke before we close… The mayor of New Orleans was asked about his position on Roe vs Wade… He said he didn’t really care how people got out of the city. (Thanks Carmen for that one)