1&1 Internet – file this under complaints about 1and1.com 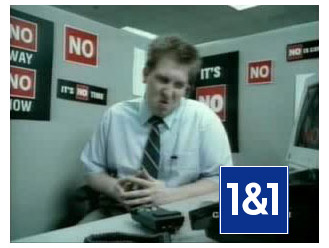 I am writing about a company called 1&1 which has a web site at 1and1.com and about their preposterous cancellation policies. I cancelled service with them back in October after subscribing for a short period of time to use their hosted exchange service. I used the online cancellation system, followed all of the procedures to a T including sending in a signed cancellation fax.

Today I call up to ask why I was still being charged and immediately the person on the other end gets all defensive and claims I didn’t send the fax (which I did). But he had record of my original cancellation request.

The fact that they never processed my fax doesn’t make a difference. Now they want me to prove to them that I sent my fax. Audacious!

I called back to speak with another person and received even worse treatment. I am angry at 1&1.

Update: It looks as though others have reported this same issue…

95 responses to “1&1 Internet – file this under complaints about 1and1.com”