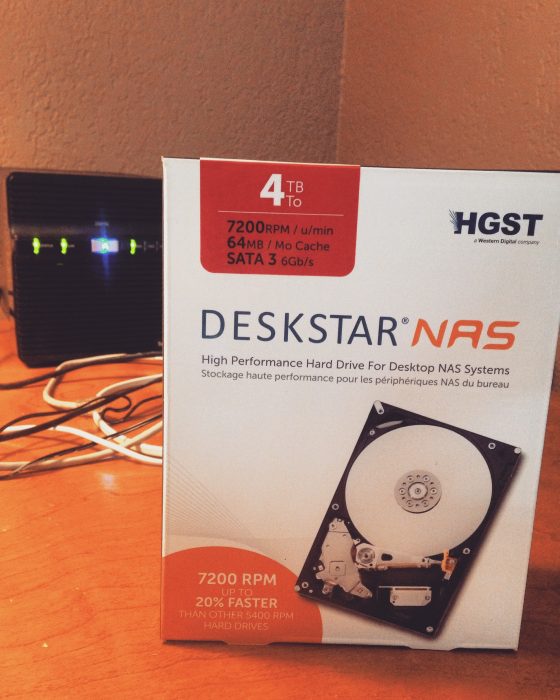 Consider this part-1 of my review of the Synology DS416j NAS for consumers.

First, some background: I’ve been storing my photo library on a 4 TB hard drive. My photo library has grown slowly over the years at a pace of approximately 1 TB per year.

My photo library has grown significantly faster recently due to my video files. I started taking a lot more video on weekends and on trips and as you well know, that takes up a lot of space! On a single trip to Maui we captured over 50 GB of video / photos.

So, my archive quickly grow and once it was a 3.8 TB I knew I had to do something.

I had a second photo drive (also 4 TB that I used CarbonCopyCloner to backup to. It basically created a backup of my main photo drive. This gave me peace of mind that if my main drive failed, I’d have a local backup.

In addition, I use CrashPlan to back up online. If I’m being honest, it hasn’t finished backing up in over a year. It just goes so slowly.

So, I was at a cross point with the backups and I decided to jump in with both feet! Network storage scares me for these reasons:

I’m worried about accessing files over the network and worried about the speed.
Obviously worried about the backup, but with Synology I can easy since it can backup within the device to the extra drives. It also has apps so. I can install CrashPlan and hope it catches up.

I installed HGST Deskstar NAS hard drives (2 drives of 4 TB each). Once I hit the 4 TB size I’m going to grab two more.

Let’s talk about the speed issue. I’m often connecting over WiFi, and we all know that WiFi is generally limited to 100 MBps speed. Well, did you know that newer Mac laptops (mid 2013+) have 802.11ac support? This means Gigabit WiFi!

Needless to say, we will be upgrading all of our laptops shortly so we have Gigabit WiFi support.

This will create a beautiful setup where accessing files over the network is quick! I can’t wait!

Here is my “unboxing” video which has been a sudden mediocre success on YouTube. I’ll probably post a follow up article about it once I am fully up and running with the new laptops. Installing the drives and using the software has been very easy.

As you can tell, so far I’m loving my NAS!