Ok people, Superman here and I have something to say about capes. Ever since the movie The Incredibles came out people stop me on the street to tell me how dangerous they can be. 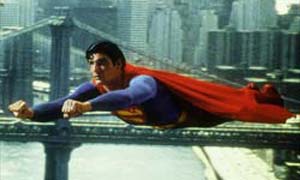 A nice photo of me mowing the skies and wearing my cape. It was taken by a speed camera. Caught again!

Let me relate a story to you. 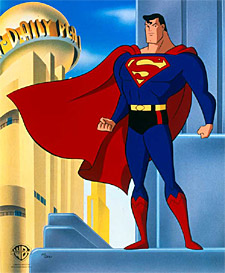 It’s a busy day and I’m waiting to cross an intersection with a half dozen other folks. I’m early for a photo shoot so taking my time. We’re all headed our own ways and the light is red.

Just then a blue sedan drives by and from the passenger window a boy shouts “Hey Superman! Take off the cape! It’s dangerous!”

I look around me at the crowd waiting to cross the intersection and smile.

“You really should take the cape off,” a woman says grinning. “You could get hurt.”

“Yeah! You could get sucked into a jet engine!” says another man, obviously a “know-it-all” by the way he is looking around at the growing crowd for reaction.

I collect my thoughts briefly.

“The cape stays on and I’ll tell you why,” I say. “The reason is because it provides radar invisibility.”

“But you don’t have any metal on you, your not like an airplane,” says a boy.

At this point in our conversation a woman screamed and we looked up and a saw a burning building with several people requiring assistance. And so I said my goodbyes in a hasty manner and rushed to their aid.

Now folks, I don’t know how to say this so I’ll just say it. The cape helps me fly AND provides necessary invisibility from modern radar equipment.

Yes, you heard it here first. Capes are good for flying around. And if I left the cape at home, I might be spotted by my enemies.

I never did make it to my photo shoot.